Hide Search
You are here: Home / WKB projects / Feeding a Monastery for € 5,75 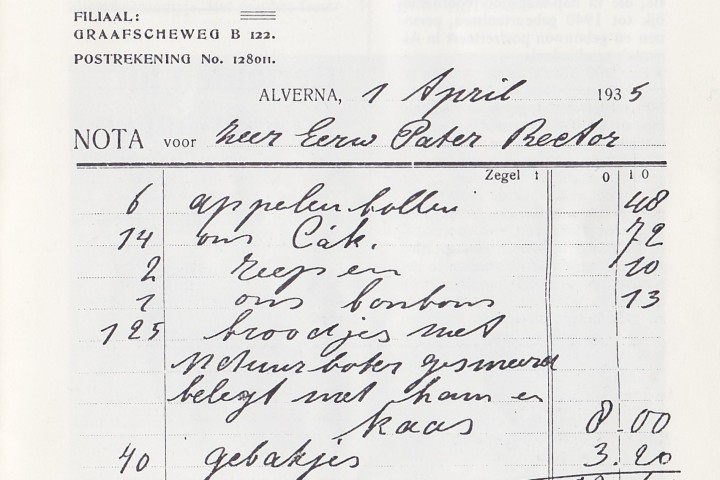 Artisan bakers, not in it for the money…

My grandfather (born in 1899) was, what you would now call, an artisan baker. But in the 1930’s it was just called a baker of course. He got up between 3 and 4 in the morning, did everything by hand and baked his bread in a wood fired oven (a ‘Den Boer’). When the weather was hot he would have difficulty decorating cakes, because the cream would be too runny. He only had a cellar, no fridge. Mid 1930’s he got an electric mixer to knead his dough. Of course this fact was immediately advertised as it was a sign of great progress. Later he also drove a Ford model T (Thin Lizzy) that had to be started with a hand crank, because next to baking, he also had to do the delivery of the baked goods (this was first done by bike with a big wicker basket to carry the bread). For his drivers license he had to drive up and down the street.

We now look back on all this as quite romantic times. But of course it was just really, really hard work for little money. Maybe that is the reason he never talked about his baking days (when I got to know him he’d already retired) and I never saw him bake anything. His children never followed in his footsteps, having seen what life as a baker was like. Every time my mother sees us baking bread or hears about our methods, something of what my grandfather did springs back into memory. “Opa (grandpa) also used to handle the dough in such a way”. “Now I remember him putting the rye bread in the oven after the other bread”. “He had this little device to make speculaasjes (ginger cookies)”. “Yes, he shaped the rolls that way too”.

Of course I wish I could have talked with him about his baking. I also wish people would have been more appreciative of his craftsmanship and skills (something we artisan (home) bakers now all aspire to. We now get compliments on our bread, which is nice, but I hope people told him they loved his bread too and they didn’t take it for granted that it was there, fresh for the taking every day. I also wish more things had been left that belonged to his old bakery. I have been to a few bakery museums and all the stuff you find there would be quite similar to the way my grandfather ran his bakery and store.

One thing that is interesting to see is the bill in the picture that dates back to 1935. It shows the cost of an order from the local Franciscan Monastery in the hamlet of Alverna near the town of Nijmegen. By the looks of it, there was something to celebrate (these monks, followers of Francis of Assisi, probably didn’t eat cake and chocolate every day)!

Here’s a translation with prices in euro (then it would have been Dutch guilders):